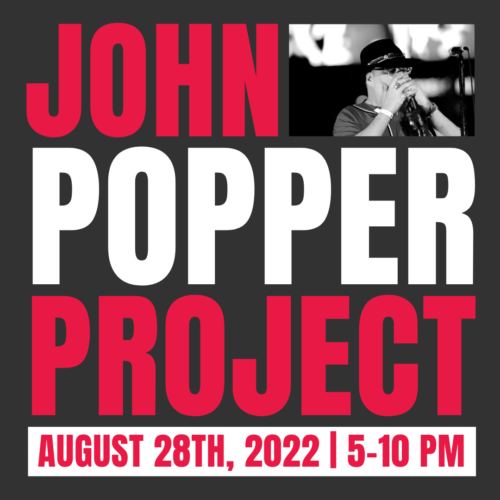 Join us at The Bullpen, Washington DC’s largest outdoor venue, on August 28th to see The John Popper Project featuring DJ Logic, Tad Kinchla and Marcus Bleecker. Don’t miss your chance to see the Project ONE NIGHT ONLY at the nation’s capital!

In conjunction with this event, we are holding a viewing earlier in the day of the documentary, “Unprescribed.” Unprescribed explores the overwhelming epidemic of veteran suicides and its link to the over-prescription of opioids to treat PTSD and other mental illnesses!

The John Popper Project is an American Fusion music group led by John Popper (Blues Travler). The group formed out of a jam session in San Francisco in December 2003 which featured John Popper of Blues Traveler, Rob Wasserman of Ratdog, and DJ Logic. The lineup of the project is John Popper on Harmonica and vocals, DJ Logic on turntables, Tad Kinchla on bass guitar and Marcus Bleecker on drums. The Band’s style is a combination of rock, hop-hop, and improvisational jazz.

The group released a self-titled album in October 2006 and peforms concerts during breaks in Blues Traveler’s touring schedule. The band has been played on NTS in shows including Mountain System Research w/ Michael Washington. Songs played included all good children.

The Last Real Circus are an Indie rock band based out of Richmond, Virginia, and Washington, D.C. Members include: Jason Farlow (Lead Vocals, Guitar) Ian Atchison (Piano & Synthesizer/Sound Engineer, Kevin Vorhis (Drums & Percussion/Sound Engineer), John Liebenthal (Bass), Michael Lamp (Lead Guitar) and John Genier (lead guitar). The band has quickly gained a big following with loyal fans from all over, with their soulful heartbeat singles, “Chaplin’s Life,” and “Nottoway.” With the addition of their new originals “Diana (Ooh La La)”, “Hard Times“ and “Stoned (On A Different Kind of Love)” to the set list, The Last Real Circus are coming into their own as an act!

They are known for their unique sound tailoring to all genres of music, energetic stage presence, storytelling and overall musicianship.

The Creaky Bones, formerly The Virginia Southpaws, was founded in 2016 outside Washington, DC in Northern Virginia. Founding members Mike Jones and Rich Russman bring a 15 year history of writing and performing with one of DCs longest running Rock bands, The Jones. The songwriting duo are supported by drummer Jonathan Matloff, bassist Jason Mattis and keyboardist Austin Day complementing the music’s rootsy vibe with jazz, pop, and retro style. Stay tuned as The Creaky Bones continue to churn out unique compositions over the coming months, and bring their live sound to your area.

Flashback to Halloween 🙌 Thank you for celebrat

Saturdays are for #SEC! Looking forward to seeing

The only #humpdaymotivation you need!!! 💯#bogo